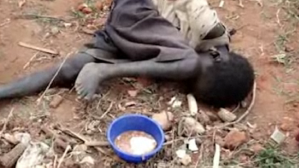 Agnes Apio has to tie up her son Francis before she can leave the house. In his state, he is a danger to himself. Where once he walked and talked like a normal child, now he is only able to drag himself along in the dirt. Francis is suffering from “Nodding Disease,” a brain disorder that, according to CNN, afflicts at least 3,000 children in northern Uganda, leaving them physically stunted and severely mentally disabled.

“I feel dark in my heart,” Apio says as waves flies away from her son’s face and mops up his urine after a seizure, “This boy has become nothing.”

“Reportedly the children gnaw at their fabric restraints, like a rabid animals,” says The Daily Tech.  The article calls them “zombie children,” having “no cure” and “no future.”

First the victims become restless, can’t concentrate. They say they have trouble thinking. Then comes the nodding, an uncontrollable dipping of the head that presages the disease’s debilitating epilepsy-like seizures. It is this nodding motion that gives the illness its name.

Nodding Disease first attacks the nervous system, then the brain. As the epilepsy-like seizures progress and worsen, the children become less and less like themselves, and more and more distant and blank. Eventually the brain stops developing and the victims’ bodies stop growing. So far, no patients have recovered.

2 comments on “ZOMBIE KIDS… The worst of the un-dead.”