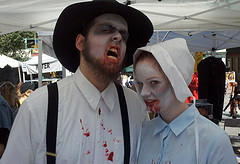 It appears that a 15-year-old Amish girl was shot in the head while driving her buggy home from a Christmas party… I know! Who would have thought the Amish partied? Regardless, they thought that she had fallen from her buggy but when she was taken to Akron City Hospital, doctors discovered the teenager had been shot in the head.

There are several theories about the shooting, including the possibility that the Amish buggy was targeted, or that Rachel was accidentally shot by a hunter.

“To think that somebody would do something like that to a sweet, innocent young lady,” said Zuercher, “I mean, she didn’t have a care in the world to anybody, and no problems to anybody.”

Hmmm… Likely story. The Amish aren’t immune from Zombification. It sounds to me like someone spotted a Zed in a buggy and took care of business. The death of Rachel Yoder is being investigated as a homicide; however, investigators are not sure if it was an accident or not.

Update 12/21/12
A man cleaning his muzzle-loading rifle shot the gun into the air, accidentally killing the 15-year-old Amish girl driving a horse-drawn buggy more than a mile away, a sheriff said Tuesday.

The man had fired the gun in the air about 1.5 miles from where Yoder was shot, Zimmerly said. State investigators were checking the rifle for a ballistics match, he said. “In all probability, it looks like an accidental shooting,” Zimmerly said. No charges have been filed.

A head-shot by a muzzle-loader at 1.5 miles? I want this guy on my Zombie Survival Team!