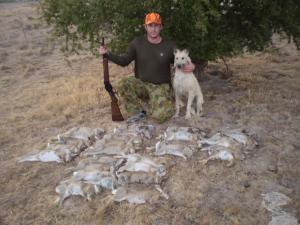 When it comes to Surviving the Zombie Apocalypse eating will be a priority. Since most of us live in cities and suburbs we have become lazy in regards to maintaining our survival skills when it comes to food because we can just jump in our car and head down to McDonald’s or your local grocery store and get what you need. But when the ZA happens there won’t be any more White Castles so catching, preparing and cooking your own food is going to be paramount if your and your Survival Team are going to keep yourselves from starving to death. Today we are going to look at one source of protein… Rabbit. There is a video by Mark Gilchrist of Game For Everything, demonstrating how to prepare a rabbit, including gutting, skinning, boiling whole and picking off the meat to use in a variety of recipes. below the fold.

Sure they’re cute, fuzzy and bouncy but they are also packed with nutrients. Rabbit meat is all white meat. Rabbit has 795 calories per pound. Compare that to chicken at 810, veal at 840, turkey at 1190, lamb at 1420, beef at 1440 and pork at 2050. Rabbit has the highest percentage of protein compared to the previously mentioned meats. Rabbit has a lower percentage of fat than chicken, turkey, beef, or pork with unsaturated fatty acids at 63% of the total fatty acids. The cholesterol level in rabbit meat is much lower than chicken, turkey, beef, pork. The U.S. Department of Agriculture has stated that domestic rabbit meat is the most nutritious meat known to man. Research shows that rabbit meat has been recommended for special diets such as for heart disease patients, diets for the elderly, low sodium diets, and weight reduction diets. Because it is easily digested, it has been recommended by doctors for patients who have trouble eating other meats. Rabbit meat compares very favorably to veal.

Rabbits breed incredibly fast and given the chance in the ZA to capture a breding couple you may have to opportunity to feed your survival team year round. Female rabbits begin breeding at the age of four months, and can produce more than 20 offspring in one season. The babies need full-time, constant care from the mother for about two weeks after birth. From the 14-day mark, they are usually able to feed themselves and begin to become more independent.

Rabbit meat can be used in most of the ways in which chicken can be used.

It is fine grained and mild flavored, and practically all of it is white meat. Like other lean meats, poultry and lean fish, rabbit meat is a good source of high quality protein. Small young rabbits (fryers, 1½ to 2 pounds ready to cook) may be fried satisfactorily in much the same way that chicken is fried. Or they may be stewed and the meat used in various recipes. Larger fryers and roasters need long, slow cooking in a covered pan to make them tender. Best methods of cooking them are stewing — that is, simmering in a small amount of water – and braising – first browning in a little fat and then cooking slowly,with or without added liquid, on top of the range or in the oven. Liquid used in braising may be a sauce that adds flavor to the dish.

For most recipes, the rabbit is cut in serving pieces before it is cooked. Cut large rabbits into 9 or 11 pieces — the 2 forelegs, 4 pieces from the 2 hind legs and 3 or 5 sections of back. The kidneys are usually attached inside the lower back and are cooked and served with this piece. The liver and heart may be cooked with the rest of the rabbit in any recipe you are using, or stewed separately and used in gravy. From a small rabbit 1½ to 3½ pounds, ready to cook, you may expect 2 to 4½ cups of cooked meat. From larger rabbits you may count on about 1½ cups of cooked meat per pound of ready to cook weight. Here is a great website full of rabbit recipes for you to try.

So get out there and improve your hunting skills and be able to feed your family or your Survival Team in the Zombie Apocalypse!