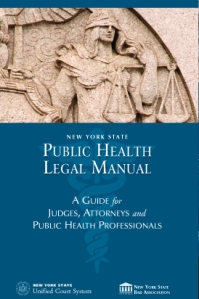 The state of New York has released a document entitled the “New York State Public Health Legal Manual” that tells to rescuers, doctors and government officials how the judicial system would work in the even of the zombie apocalypse, a terrorist attack, major radiological or chemical contamination or some other widespread epidemic. You can download the PDF by clicking the link above or by clicking the picture to the left. According to Professor Shauna Disastro, DontGetBit’s soon to be Professor of “Zombology and Survivalist Studies”… “I find very little about it shocking or surprising, nor that it is so detailed, it IS New York… the over governmented beaucratic craphole”.

Imagine if you will… The ultimate zombie apocalypse is upon us and the government is trying to regain control. Zombies and fleeing humans run the streets. The blood of the world flows into the Earth as you and your team of Zombie Survivalists hold up in your safe house, defending your families lives from the zombie hoards that roam the streets trying to eat you! The government orders Martial Law. What powers does the government hold? How does the justice system work? Both are are powerful questions with difficult answers. But how about more serious questions like what to do in quarantines, closing businesses, mass evacuations, warrant-less searches of homes, killing of infected animals and seizure of property, when laws can be suspended and whether infectious people can be isolated against their will or subjected to mandatory treatment.

The most interesting line in the manual according to the NYTimes:

The suspension of laws, it says, is subject to constitutional rights. But then it adds, “This should not prove to be an obstacle, because federal and state constitutional restraints permit expeditious actions in emergency situations.”

Here’s the link to the PDF: http://www.nycourts.gov/whatsnew/pdf/PublicHealthLegalManual.pdf

3 comments on “NYC Releases Manual For the Apocalypse”