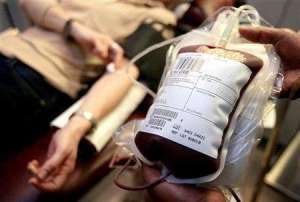 Killing zombies is a bloody business. Trust us we’ve run the simulations. Not only is it bloody from the de-animated zombies but serious injuries can occur to survivors as well. Shrapnel wounds, wounds from exposed building materials and even friendly fire can cause someone bleed out in less time than you think. But not anymore! Say hello to ARTIFICIAL BLOOD! Stockpile now and be safe later, but with the price tag of $1000 a pint and the average human body holding in 10 pints of that red sticky stuff it would be spendy to have a full body’s worth of blood on hand.

July 17, 2010: The U.S. has finally developed artificial blood. It is grown from umbilical cord cells and genetically modified animal cells. It won’t be available for use for another five years (lots of testing and production optimization required), and will cost about $1,000 a pint (450 millileters). That’s about three times the cost of collecting and processing blood from human donors. But the higher cost is offset by lower waste and the ability to create larger supplies on demand.

While some blood is donated by troops in the combat zone, most of it is sent over from the U.S. or other areas with lots of healthy donors. Whole blood only has a shelf life of four weeks, and a lot of it has to be destroyed because it is not needed. That’s because a lot of blood has to be available in a combat zone, at all times, to deal with spikes in casualties. These spikes are unavoidable, and often unpredictable, given the nature of combat in Iraq and Afghanistan. Combat casualties often involve massive loss of blood, and you have to have the blood for transfusions when you need it. The artificial blood will make it possible to maintain combat reserves without putting a strain on the civilian supply.